The effect of cold atmospheric plasma on a titanium surface was investigated via SEM, XPS, contact angle, cell morphology and ROS. Furthermore, the implants were implanted in a rat femur for in vivo analysis. After eight weeks the hard tissue integration was investigated via CT analysis and histological analysis.

Both, the in vitro and the in vivo analysis show an altered titanium surface, resulting in a better wettability and thus an increased amount of new bone formation in the tissue surrounding the implant.

The effect of surface modification of titanium implants on bone formation is the object of several investigations. Especially cold atmospheric plasma treatment shows promising results. While most investigations focus on in vitro investigations, this work from Tsujita et al. links the surface characterization with investigations of hard tissue integration in vivo.

Titan implants were treated with cold atmospheric plasma generated by the piezobrush® PZ2 for 30 seconds at a distance of 10 mm. The process gas was generated by the device from the ambient air.

Additional to the in vitro experiments, plasma-treated and untreated titanium implants were implanted in the rat femur. After eight weeks of healing, the implant was further investigated. In figure 4, you see a three-dimensional computer tomography picture of the implant. It is clearly obvious that the amount of new bone formation is for the treated implant higher (Fig. 4 a) than for the untreated implant (Fig. 4 b).

From quantitative histomorphometric analysis (fig. 5), both, the bone area ratio (BA), and the bone-to-implant contact (BIC) could be determined. Both values are strongly enhanced for the plasma treated implants. In combination with the histopathological image of the bone tissue around the implant and the fluorescent labelled dynamic tissue morphometry, a early enhanced osseointegration and formation of hard tissue could be confirmed.

Early osseointegration is important to achieve initial stability after implant placement. In the investigation, control and experimental groups included untreated screws and those irradiated with atmospheric-pressure plasma using the piezobrush, respectively. The femurs of rats were used for in vivo experiments. Micro-CT analysis showed that more new bone was formed in the test group than in the control group. Similar results were shown in histological analysis. Thus, titanium screw, treated with atmospheric-pressure plasma, could induce high hard tissue differentiation even at the in vivo level. 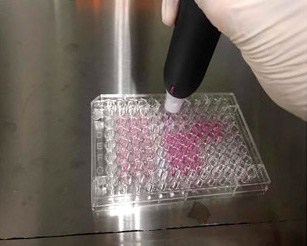